Into Portugal, Tavira and back into Spain for the 'Bonanza' experience... displaying Booted Eagles, Spoonbills and Kites plus new migrants

My last 2 or 3 weeks here and the journey back north through Spain starts with a journey into Portugal to pick up my buddy Mark from Faro airport. Slightly dodgy start with a police fine of 30 euros for parking where I shouldn't have at the airport but great to catch up and have some company and banter along the way.

Tavira and Castro Marim being the obvious destinations before heading back into Spain and the salt pans of Sanlucar de Barremeda & Bonanza. We searched in vain for a different tern species and did get a few Caspian Terns but in the main it was Sandwich Terns that were passing.

Further east towards the Spanish border a failed attempt to access the Castro Marim parc natural because of roadworks and diversions, took us instead to the fishing village of Villareal de Santa Antonio where we saw 100s of passing Gannets, some of them no doubt bound for UK breeding grounds, a few Great Skuas and some Pallid Swifts in off the sea.

Of human interest here were the activities of the many local shellfishers ... stretching as far as the eye could sea across the shallow estuary. One of the few times my 400m lens has come out for a landscape pic!
﻿
Nice place for a boat too ..... 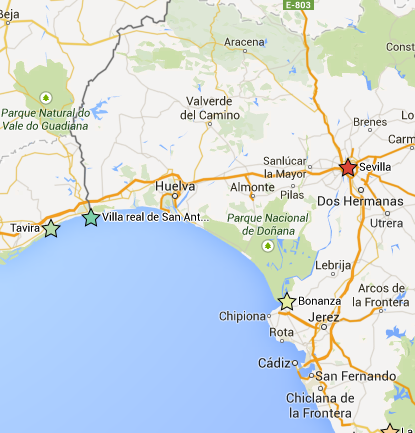 The saltpans of Sanlucar/ Bonanza and the adjacent forests of parcel pine (or algeida) are old and favourite haunts of mine and Mark's. They make up the part of the mighty Donana reserve on the other side of the Guadalquiver river and although only a relatively short distance along the coast from where we were in Portugal, to get there involves a drive all the way to Sevilla and then down the other side of the river - 3 hrs!

Worth it though. The weather was hot, the birds plentiful and Mark discovered he quite liked riding around on my bike!
So much to see here as always .... skies full of displaying Booted Eagles, Storks and migrant Black Kites, nesting Grey Herons and Spoonbills, flocks of Night Herons and to cap it all off 3 new migrants - Subalpine Warbler,a single Willow Warbler amongst the many wintering Chiffchaffs and 1 singing Nightingale.

Tricky to convey the majesty of displaying Booted Eagles in a hot blue sky but here's a pair circling together - a dark phase female and a light phase male. 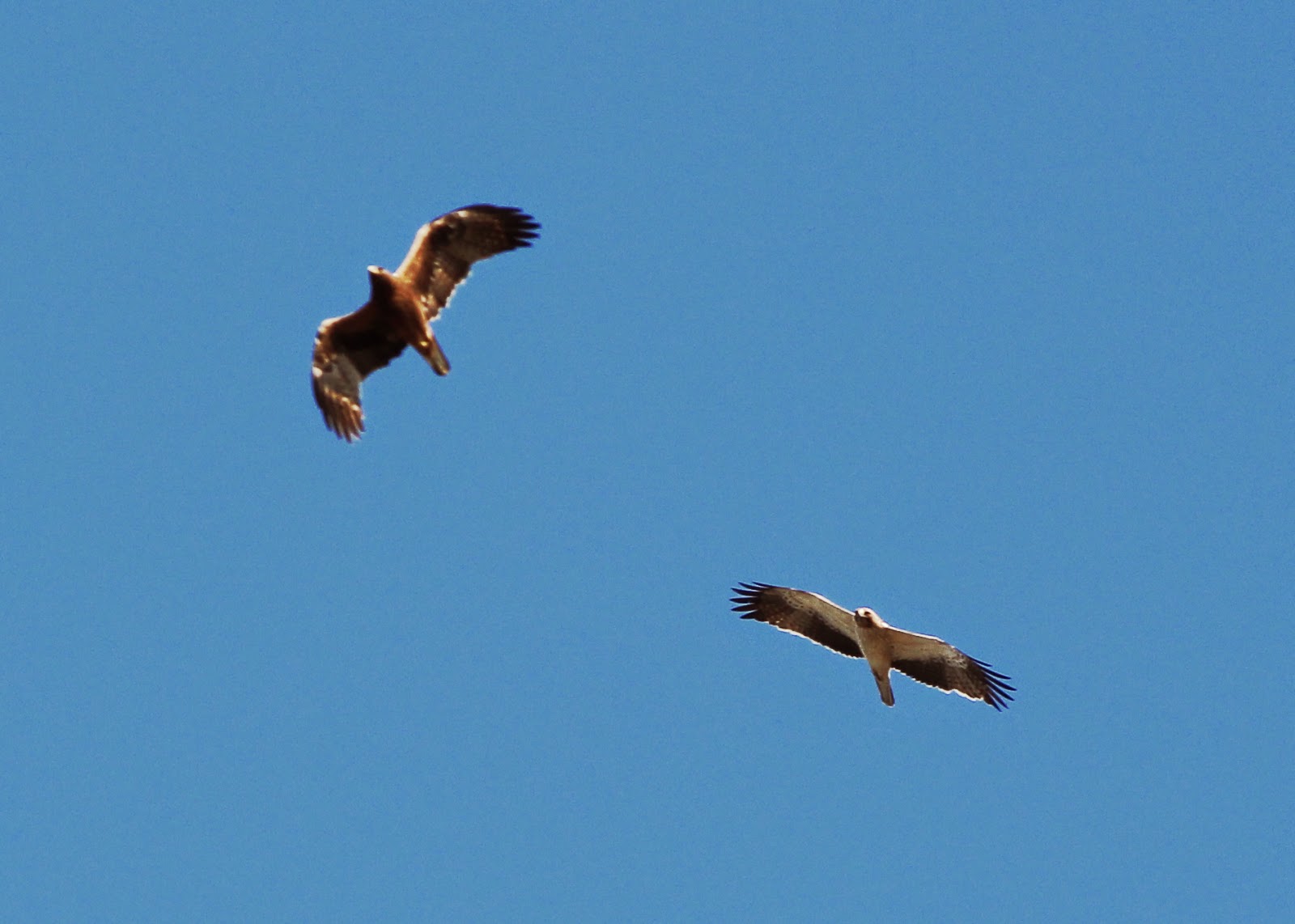 .... and the same male performing, soaring up, curling himself into a ball and then diving down in an almost vertical stoop before repeating in a series of looping soars and dives. Pretty awesome to see, the first time I've managed to photograph the event and these pics don't do the show any justice at all!

Spring flowers like these Narcissus or wild Daffodil look as if they've been out for a week or so, in fact some seem to have 'gone over'

The other flower is Halimium, a kind of rock rose and a flowering shrub that dominates and covers the scrubland in places with gorgeous yellow blooms.

We searched in vain, as we always do, for a Western 'British' type Yellow Wagtail on passage but all seen, and there were a lot, were all of the Blue headed race. Jolly nice to see flitting about everywhere though!
﻿

Other good birds seen here but not photographed included Long Eared and Tawny Owl, Purple Swamphen, Osprey, 20 or so Marsh Harriers, Ruff, Tree & Spanish Sparrows and Calandra Larks.
Onto Extramudra next and our first point of call will be the plains of Serena, the biggest area of uncultivated land in Western Europe!

Posted by BagginsTim at 1:34 PM