TimbobagginsAbroad has done his time 4+ years. Time for a change, but only in name .. still the same old roving reflections as I stumble across the countryside with camera in hand! Here's the link to the new Blog

BAGGINS ON THE LOOSE - the new Blog
Posted by BagginsTim at 6:02 AM 1 comment:

Got some great pics of hunting Kestrels the other day whilst I was scouring the hedges and bushes at Flamborough for migrant warblers. Bright morning sunshine always helps but with a family party of 4 that were continually stooping for prey along the cliffs I couldn't fail!

Much easier against the sky and the sea, and of course a good hovering Kestrel pic is a must for the collection and these are some of the best I've ever managed. At least 3 distinctly different individuals here including one which appears to have a chunk missing from its wing ... didn't seem to affect its flying ability however.

﻿
﻿
﻿I failed abysmally to see any of the dozen or so Yellow Browed Warblers that were present on the headland but to my credit I did see a Barred Warbler (hopeless pic unless you like hawthorn bushes!) and there were passage thrushes everywhere, especially further up the coast at Buckton (adjacent to Bempton RSPB -  mainly Song Thrushes, Blackbirds, the odd Redwing, 3 Fieldfare and the undoubted highlights - 5 Ring Ouzels. Damn difficult to get close but a passing Sparrowhawk flushed one and enabled me to get some half decent 'in flight' shots.


Very reminiscent of our common or garden Blackbird, Ring Ouzels are a tad bigger, males sport a distinctive white crescent across their breast and they have silvery grey wings. Fab birds, they breed in mountainous, hilly regions (there's a healthy population in the NY Moors) most of these however are likely to have come in from central Europe. Some excellent info here if you want to know more about these birds - Ring Ouzels

I got lucky with the Fieldfares I think - they just appeared after a bit of mizzle and then flew off south. To my knowledge, although there have been a few at Spurn, these are possibly the first records this Autumn for Flamborough.

Footnote re the Ring Ouzels - the next day and well tuned into their call, I had another of these birds at Fangfoss, no pic sadly but a mega record and the 80th species for my local patch. Well done me!


and here's that bush with a Barred Warbler in it - I think maybe I should stick to photographing Kestrels!

September ins and outs down my way, young swallows venture south and the finches move in.

September .. the summer crops are gathered in and wild flowers are blooming their last. Nights are drawing in, temperatures are dropping, cricket's days are done and rugby takes centre stage, and small birds of many species are moving south ..... 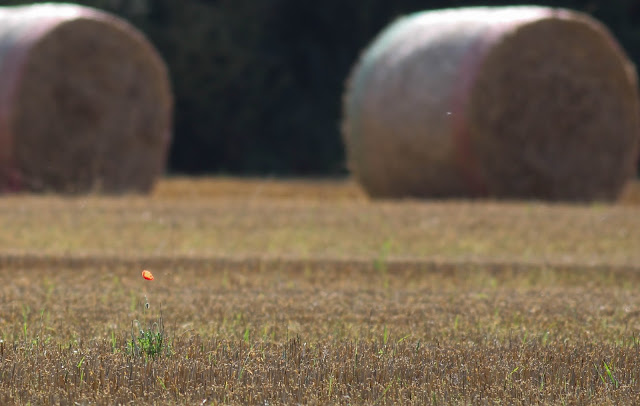 Almost all of the Swallows around Fangfoss Park have now departed, slightly earlier than last year when I had good numbers well into the last week of September and then the odd late straggler into the first week of October. Their long and often hazardous flight down to sub Saharan Africa must be a daunting one for all this year's young ones and, although many other birds undertake the self same amazing journey, there is something endearingly magical about the annual departure of these vulnerable looking wee birds.

﻿
These youngsters were 2 of many that were massing together on Strensall Common a couple of weeks ago and obviously getting ready to go. They'll be well on their way now, their journey time south to Africa is a lot more leisurely than the dash back north in the Spring and these 2 can be reasonably confident of catching flies under South African skies within a couple of months but my they look so fragile!

﻿
﻿
﻿
﻿
Departure time from Europe for many other birds too, including many warblers using the UK as a convenient stop off point and feeding station. The many hedgerows around my local patch here in Fangfoss have held many Willow Warblers, ChiffChaffs, Whitethroats and Blackcaps over the past few weeks and even a couple of Lesser Whitethroats ... sadly not able to photograph the latter but as with my Whinchat of a couple of weeks ago a welcome new species for the area.

﻿﻿
﻿
Spotted Flycatchers bred here this year and this may be one of the youngsters but could equally be another individual on passage ... it was in amongst a roving group of tits and warblers.

There's a lot of fruit laden hedgerows around the countryside at the moment and all worthy of a look if you're looking for migrants (and I don't mean Syrians!). Just as the warblers, chats and flycatchers feed up on this seasonal feast before heading south, other birds are arriving on our shores either to stay or in transit - Blackbirds, Robins and assorted finches have all increased in numbers of late and a small flock of Lesser Redpolls in amongst the more numerous Goldfinches is a sure sign of the changing season ... 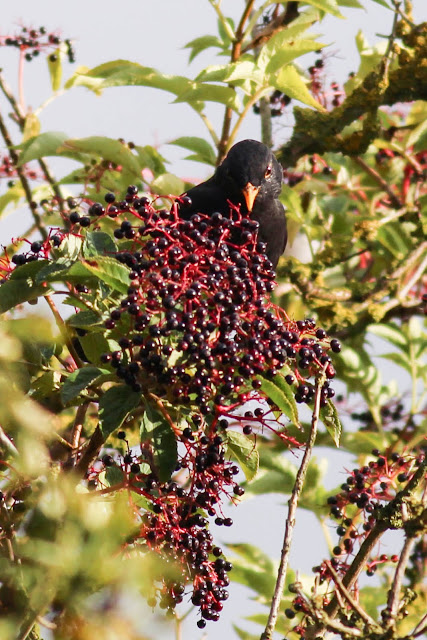 No Redwings or Fieldfares have made it this far inland as yet but a steady increase in Blackbird numbers, like this one gorging on Elderberries.

Good to see some healthy flocks of Lapwings back in the fields too ...
﻿
I'm glad my Aug 24th Honey Buzzard sighting finally made it onto the Flamborough bird observatory site here - http://fbo.org.uk/category/sightings/ It was the highlight of my day too, even though I had to study the pictures before I realised what it was!

Back here in the Yorkshire Wolds our own Common Buzzards seem to go from strength to strength with up to 8 in my immediate vicinity.

Lucky shot of this one calling as it swept past me!


Almost certainly I'll be heading out to the coast soon to catch some more visible migration ... maybe an October trip out to Spurn when the winter thrushes start coming in, but in truth I'm more than happy walking the lanes and hedgerows of my own patch!

Posted by BagginsTim at 12:20 AM No comments:

Searching the Yorkshire coast again for passage migrant birds last week brought us precious few ... a smattering of Redstarts,  'WillowChaffs', Whitethroats and a Lesser Whitethroat but the undoubted highlight was a couple of scrapping Sparrowhawks at Buckton. Quite why they were being so aggressive to one another I'm not sure - maybe they were looking for the same prey as us and similarly frustrated took it out on each other! More than likely though one of these birds is just an intruder on the others patch; whatever the reason it was great drama, went on for a good 5 minutes and I'm reasonably pleased with these captures....

All started out quite tame ... just a couple of Spars out a hunting

Not sure if this was the winner or the loser but with normal service resumed after all the commotion it was the sharpest pic!


I've never seen Sparrowhawks being so aggressive with one another, in fact not common to see this much interaction between birds that are more often than not seen as lone hunters.

Posted by BagginsTim at 1:17 PM No comments:

Flamborough for the first proper 'fall' of the year .. Honey Buzzard the star amongst many migrants

It was just 'one of those days' we birders dream about ... late August, persistent easterly winds and a forecast of fog rolling in off the sea and all this after a weekend of sultry storms in these 'ere parts ... there had to be a 'fall' in the offing!!


I toyed with the idea of Spurn Point but decided it was just too far and that Flamborough Head would be just as good for the first proper migrant 'fall' of the Autumn - birds migrating South and getting caught by the wind and forced to make landfall on the nearest coast.

Often spectacular and always the chance of a rarity or two, and there were indeed a couple of rarities knocking about - a Red Backed Shrike that didn't look quite as good in the mist and through a fellow birder's scope as this superb pic by Tony Dixon, who if its the same TD, is an old pal of mine going years back ... get in touch Tony!


The other rarity was Icterine Warbler, 2 of them, neither of which I was lucky enough to see but I did manage a splendid Wood Warbler in the Old Fall wood and then a lucky rarity of my own.

A similar bird was seen later on in the day at Spurn and highly likely that these are one and the same judging by the obvious damage to some of its flight feathers. Here's the Spurn pic (courtesy of Nigel Glen) - different light and aspect. Judge for yourself but its the same bird for me!

What a cracking start ... I'd already bagged a Wood Warbler, several Pied & Spotted Flycatchers, a couple of Redstarts, Garden Warbler, dozens of Willow Warblers and then a probable Honey Buzzard - all before 9.00am!


﻿
Only downside was the poor visibility and with intermittent fog making photography less than easy it was a bit frustrating, especially on the headland, but when the mist cleared it was warm and in addition to the many migrant birds about there were also hundreds of butterflies on the wing - many Wall Browns and Red Admirals plus the occasional Painted Lady.

..... even managed a half decent 'dragonfly in flight' pic, an Emperor no less

Back amongst the birdies I had mixed fortunes with photographing the common migrants on show. Still lots of leaves on both tree and bush makes it difficult enough without errant twigs spoiling the shot!

And then there are the predators that seem to show up at such times .. I had at least 3 Sparrowhawks on the Headland, all looking for an easy lunch making the migrants skulk even further back into the bushes!