The big salty lake at Fuente de Piedre - Cranes, Sandpipers & Flamingoes then some Raptor migration in the raw at Tarifa 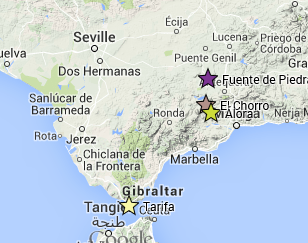 Without taking a ferry across to Morocco (been seriously toying with the idea), I've gone as far south as I planned to do and now kicking my heels in the Kite surfing capital of Europe .. Tarifa.

﻿
En route I stopped off at Fuente de Piedre after a long drive from Almeria and was immediately into House Martins, Barn Swallows and the odd Red Rumped Swallow buzzing around my head. I've tried and failed so many times to get decent pics of Swallows and other hirundines but in the perfect late afternoon sunshine that greeted me here I was partly redeemed ...
﻿﻿
After spending 30 minutes trying to get what I thought would be my best ever Wood Sandpiper pic, it turned out to be a pale Green Sandpiper, never mind, the pic wasn't that good anyway but the many Black Tailed Godwits were very photogenic in the last rays of the setting sun ...﻿﻿﻿﻿

﻿﻿
After so much windy weather it was a joy to have at least one day of calm and although it didn't last long it was good to rest up and explore in relatively kind conditions. I stuck around for a couple of days here and traversed the whole reserve. Birds of note included a female Hen Harrier, 4 Golden Plover, 6 Little Ringed Plover, 2 Water Pipits, 4 Ruff and a flock of 20 or so Spanish Sparrows. This large inland mainly saline laguna (over 1500 Hectares) is world famous for it's resident Greater Flamingoes (up to 50,000 some years .. during my visit a mere 3000 or so!) and wintering Common Cranes (I counted a max of 360).

Access to the very best bits is limited and regularly patrolled by the SEO (bird life Spain) but there are several viewing areas and the whole lake is easily circumnavigated by minor roads. The visitor centre just outside of the village of the same name is an obvious place to start any visit but if you're a birder its best to avoid weekends when the Spanish and their offspring go a walking!

﻿﻿﻿
Lots of common Spanish birds around and about the fields ... Stonechats by the dozen, Chiffchaffs, Crested & Short Toed Lark (impossible to photograph!) and lets here it for the humble Corn Bunting ....the day I come to Andalusia and fail to see one of these 'dumpsters' will be a sad one indeed. Their jangly song (likened to a rattling of keys) is already a rare sound in my own corner of the UK due to habitat loss and I wonder how long they'll be as common here. It'll win no beauty contest in the avian world but I love 'em even more for that so here's 3 for the Corn Bunting gallery including one singing ...

﻿﻿
﻿
An overnight stop and a brief morning explore around Alora and the El Chorro gorge produced more Swallows, Little Ringed Plovers and another Teminck's Stint on the Rio Guadalhorce and a rather tasty Black Crowned Night Heron perched on a telegraph wire at dusk.
﻿﻿

Tarifa meanwhile has been a tad disappointing so far from a migrant point of view with just one brief moment of major passage on the 26th Feb ... with White Storks, Griffon Vultures, Black Kites, a few Common Buzzards, Barn Swallows and a probable Ring Ouzel braving the enduring Westerly winds

I'm sure there are plenty of these knocking about in my home county right now but they're not a common bird anywhere in Spain and I was pleased to tick these Oystercatchers off the list!


In the increasing warmth of the SW a few butterflies are on the wing, Clouded Yellows being the most obvious amongst the 'whites' and here in Tarifa I've had several of these winged beauties - Monarch Butterflies ... normally associated with North America, there is an Iberian / Canary Isles population and very welcome they are too flying around on huge slow wings like small colourful bats!
﻿


﻿
...... and clinging on to the undersides of a drainage pipe some kind of Geko?
﻿
﻿
Today (28th Feb) has been better for raptor migration with some impressive Black Kite movements early this morning with appx 100 in off the sea at 09.00ish. I looked up and the sky was suddenly filled with winged shapes! All over within 3 mins and I was so busy watching I didn't get a single shot off. More through the day and in total maybe 250 over the straits of Gibralter with the occasional Marsh Harrier, Common Buzzard, plenty of Griffons moving across and 3 Short Toed Eagles. There was also a steady movement of Barn Swallows and House Martins.

Been quite a day and to cap it off 40 or so more Black Kites in over Tarifa town itself at dusk. The weather is set fine for a few days with little or no wind so I expect more and anticipating Pallid and Alpine Swifts any day!
... and to round off here's a couple of birds that are totally everywhere and thus tend to get passed over ... Stonechats are a speciality bird in Yorkshire and Crested Larks none existent!

Posted by BagginsTim at 3:32 PM